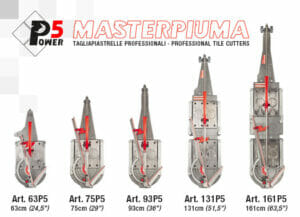 Montolit are set to announce a new updated version of their MasterPiuma range of manual tile cutters towards the end of March. Nothing has been announced officially about the new range, but there are expected to be some minor upgrades to the existing MasterPiuma P3 range.

The cutting length of some of the cutters may be increased slightly in the new P5 range, but we expect the same number of products to be included, which currently ranges from the smallest 44P3 to the largest 155P3.

As soon as the new range of MasterPiuma P5 Tile Cutters is made available you can be assured that Tiles & Trims will offer you the best price.

UPDATE - The new range of Montolit P5 tile cutters has officially been announced. The P5 range will initially consist of 5 manual tile cutters, the smallest being the ever popular 63cm tile cutter, 63P5, the 75cm and 93cm options are still available, but the 125cm offering has been replaced by a 131cm 131P5 and the 155cm has been increased to 161cm.

Suppliers of Tiles and Tiling Supplies to both the trade and general public.
Mon - Fri | 9am - 5pm